Steve Jobs would be proud.

Despite complaints that the price points were too high, the sales for the newest release of the iPhone since his passing nearly doubled from the previous record. Apple released the iPhone 5s and iPhone 5c over the weekend, selling 9 million units compared to the 5 million units the iPhone 5 sold last year. The strong figures blew analysts estimates out of the water proving there is still strong demand for Apple’s latest technology.

The iPhone 5s boasts the title of being the world’s very first 64-bit mobile phone. It distinguishes itself from the iPhone 5 with an A7 chip (iPhone 5 has A5), a fingerprint identity sensor and 4G LTE wireless. Apple is expanding out of its monochromatic shell colours of black and white; the iPhone 5S comes in silver, gold and space grey. The iPhone 5C, with an A6 chip and minus the fingerprint identity sensor, really pushes the boundaries of colour offering bold, almost fluoro, shades in green, yellow, red, blue and the standard white.

How much will the latest design features set the average consumer back? An unlocked iPhone5S with 16GB of memory starts at $869. This version has sold out in many stores with approximate delivery dates for new stock sitting somewhere mid-October. The iPhone 5C sells for $739 and, despite it not selling out, may have sold more than the 5S due to stock constraints. Apple does not provide a break down of individual model sales. 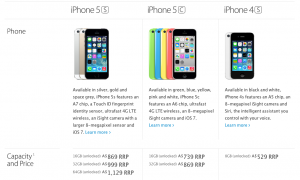 It is interesting to note that Apple entered two new markets with the launch of its new iPhone designs, entering a total of 11 markets this year compared to just 9 last year. Significantly, China is included in that list, a market that accounted for 2 million of last year’s 5 million phone sales. Notably, China has undoubtedly been a large contributor to the significant growth in sales for this year’s launch.

Finally, the launch of the newer iPhone versions onto the market has dropped the price points for previous models. The iPhone 4S now retails at $529 and has proved popular, being in short supply in some stores. Consumers of Apple products are clearly keen to continue supporting the brand while new customers flock to the iPhone from competitors Samsung and Microsoft.

Microsoft recently purchased Nokia’s mobile handset business in a bid to claw back some of the market share they have lost to both Google’s Android (together with Samsung) and Apple’s iPhone and iOS system. With the recent astounding success of the new iPhone 5S and 5C sales, it remains to be seen what Microsoft and Samsung will do to remain competitive in the smartphone industry.