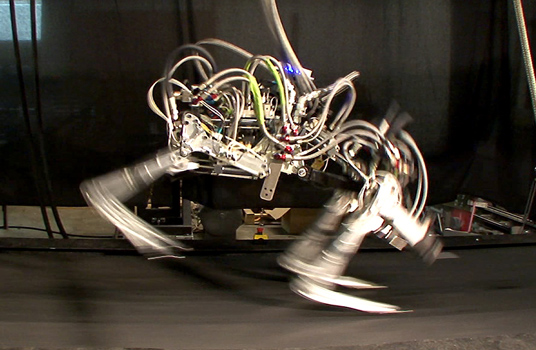 The posting of a giant dog-shaped robot walking step by step up a steep hill in a forest, righting it’s own balance with some quick side-stepping after being shoved with a researcher’s foot and picking its way through snow and over ice caused an internet sensation as we saw for the first time the futuristic premonition of animal-like robots come true.

The posters of the video, which is currently at 15.7 million views, were researchers at BostonDynamics, a robotics research company recently acquired by Google. This the eighth robotic company acquired by Google in the past six months as part of a new division set up to capitalise on the robotics industry within the decade. No information on how much the transaction involved has been released.

The acquisition of BostonDynamics is making headlines because its the pick of the bunch when it comes to futuristic robotic research. Cheetah, a robot that holds the record for the fastest running robot at 29mph is just the beginning.

SandFlea can jump onto and off the roof of buildings while the LS3 – a horse-sized four-legged dog, autonomously follows military personnel through even the roughest terrain.

It’s not all about animals though. BostonDynamic has also worked on human-like robots, achieving incredibly realistic movements.

BostonDynamics was previously funded by DARPA an arm of the US military. Some concern has been expressed as to whether this focus is in alignment with Google’s focus on consumer goods. With its motive of ‘Don’t be Evil’ Google has promised to reduce BostonDynamics involvement with the military. “We’ll honor the firm’s current workload but won’t pursue future military funding.”

Google plans to use the technology acquired in the purchase of robotics companies to target the manufacturing and industrial markets, though consumer robotic markets aren’t strange to them. Self-driving cars are already beginning to make their way onto the roads of the world’s most populated streets. With Google’s already advanced knowledge of Artificial Intelligence, it’s possible that robotics will be the new revenue stream Google continues to push to in an effort to move beyond search and advertising, still responsible for 90% of the firm’s revenue.

Some hope that Google’s creativity and connection with all types of consumer needs will result in products similar to the Roomba, a carpet-cleaning robot suitable for any household. With visions of The Jetsons swimming before consumer’s eyes, hopefully the combined knowledge of the top robotics companies in the world will be able to bring robots that can integrate with society seamlessly and helpfully.