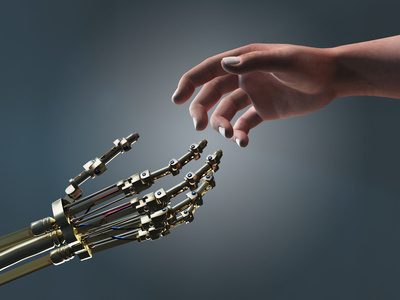 The concept of a robot has been around since medieval times. History records show that churches during that era, used figurines run by hidden mechanisms to convince peasant worshippers into believing in a higher power. We use them for slightly more sophisticated methods today, like building products and even micro surgery but they’re hardly a regular part of our daily lives. That could all be about to change.

The modern day robot came out in the 1940s, around the same time that computers were developed. But the robot became very popular during the 1950s and 1960s when mass production of automobiles was in full swing. At that time, automobile manufactures employed industrial robots to help with factory operations.

Several robots today are operated from a distance but they are increasingly performing tasks independent of direct human control.

How Will Robots Behave?

Dr. Guy Hoffman, Ph.D., assistant professor in the School of Communication at IDC Herzliya, and co-director of the IDS Media Innovation Lab, designs and builds robots that communicate with people.

He has designed several robots, including “AUR,” a robotic desk lamp that follows the user around the room and changes ambience on voice commands. In this video, he emphasized how everyone will live with a robot at some point in his/her life and that it is his dream that robots will be “more fluent, more engaging, more graceful.” He also wants robots to be “able to take chances and improvise,” to anticipate what humans are going to do – even be able to make mistakes and correct them.

What Will The Robots Do?

Another roboticist, Vijay Kumar, has developed robots similar to unmanned aerial vehicles. They are only around 8 inches in diameter, weigh less than a pound and consume only about 15 watts of power. He anticipates the robots will be used in everyday life in many different ways:

Whether we like it or not, robots are here to stay. But instead of looking at them as mere machines or threats to human employment, they should be seen as “helpers” who can assist humans from the most menial tasks to the most complicated and dangerous missions in different fields and industries.