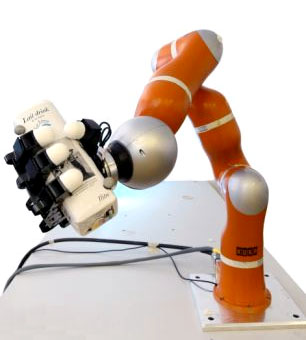 Humans have been pretty good at catching objects while natural sensing the movement of the object and its environment. In the past robots lacked these advanced sensing skills. Now scientists have invented robots that are capable of reacting very quickly and can grasp objects in less than five hundredths of a second.

Ecole Polytechnique Federale de Lausanne (EPFL) has designed a robotic arm that can catch objects even before you finish blinking your eye. The robot at the first glance may appear completely motionless with its palms open. It imitates human behaviour and uses it cameras to detect the path of the flying object. However, as soon as it has its target up in the air, it quickly unwinds and grabs the object super quick in less than five hundredth of a second. The robot is also intelligent enough to predict shifts in the centre of gravity of objects such as a half filled coke bottle. What’s amazing and unique is its ability to catch objects of any irregular shape.

This is a huge achievement and Head of Learning Algorithm & System Laboratory (LASA), Aude Billiard proudly quoted “Increasingly present in our daily lives and used to perform various tasks, robots will now be able to either catch or dodge complex objects in full-motion. “

Catching things in the air requires an integration of various parameters and the spontaneity to react to unforseen events super-fast. Pre-programmed machines often do not adapt quickly to data changes. This results in recalculation of trajectories which takes more time making it inefficient in situations where even a second counts. This is where robotic arms score pretty high over others!

While deigning the robotic arm, scientist took inspiration from the way human beings learn things; which is by imitating others and trying tasks out time and again. The technique popularly known as “Programming by demonstration” refrains from providing specific instructions to the robot. It instead revolves around the idea of suggesting all possible trajectories of achieving the goal. The scientists simply guide the robotic arm to the target and repeat the task a number of times so that it gets familiar with it.

Scientists at EPFL conducted their research using a variety of objects ranging from an empty bottle, ball, hammer, a half filled bottle and a tennis racket. These objects were specially selected for the study as they throw up multiple range of situations where the part of the object that the robot is supposed to catch does not align to its centre of gravity. The idea was to create robots efficient at handling objects both statistically and dynamically unbalanced.

These quick reacting robots have a variety of potential applications. They might be prominently deployed on satellites and space ships for clean-up operations of space junk in the orbit. They could possibly also be used in various safety related tasks as catching falling people or avoiding car collisions.

While one might not possibly find these robots in a basketball ground very soon, it’s not long before they can be seen offering critical help in case of accidents or in space research!